The introduction of a new format for 2018 proved to be a great success as 32 finalists competed in the Club’s Annual Championships. The warm and sunny weather was enjoyed by the players and spectators alike.

The Cup and Plate competitions, running simultaneously over the summer period, attracted 87 initial entries and culminated in 10 keenly fought matches on Finals Day. Championship tie breaks featured in several of the matches played. 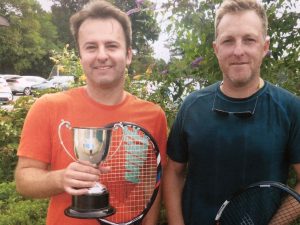 Alistair Howard, partnered by Lucas Alexander, succumbed to the keen shot making of Alan Bourne and Robert Payne in the Men’s Doubles (Cup), Colin Whitell and Paul Heald-Barraclough (Plate) won against Len Thomas and Richard Mains-Smith by the narrowest of m 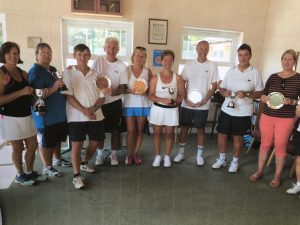 Caroline St John and Pat Indge fought hard in the sultry conditions for their victory against the very competitive partnership of Angela Smith and Prue Levers (Cup) – tie breaks featured yet again. Equally, in the Plate competition, Georgina Havers and Nina Jamieson met defiant opposition in Heather Stubbings and Penny Roach-Hudson before claiming their eventual victory.

In the Mixed Doubles (Cup), the high standard of play was maintained. Georgina Havers and Robert Payne proved the stronger team at key points in the match and achieved a well deserved win against Colin Whitell and Pat Indge. Nicky Bowler and Len Thomas played a determined match against Marian and Craig McEwan in the Plate competition only to lose to some accomplished shot making and teamwork.

At the presentation of trophies, Club Chairman Colin Whitell thanked Caroline St John for organising a very successful Club Tournament. He also acknowledged the contributions of the many others who helped to make the competition so enjoyable.